On Wednesday and Thursday this week, 7th and 8th December 2016, LPRC hosted a kick-off meeting in La Palma for a Work Package of the Horizon2020 project, ¡VAMOS! (¡Viable Alternative Mine Operating System!).

The workshop was organised with the objective of understanding and planning the various deliverables within the scope of the Work Package. 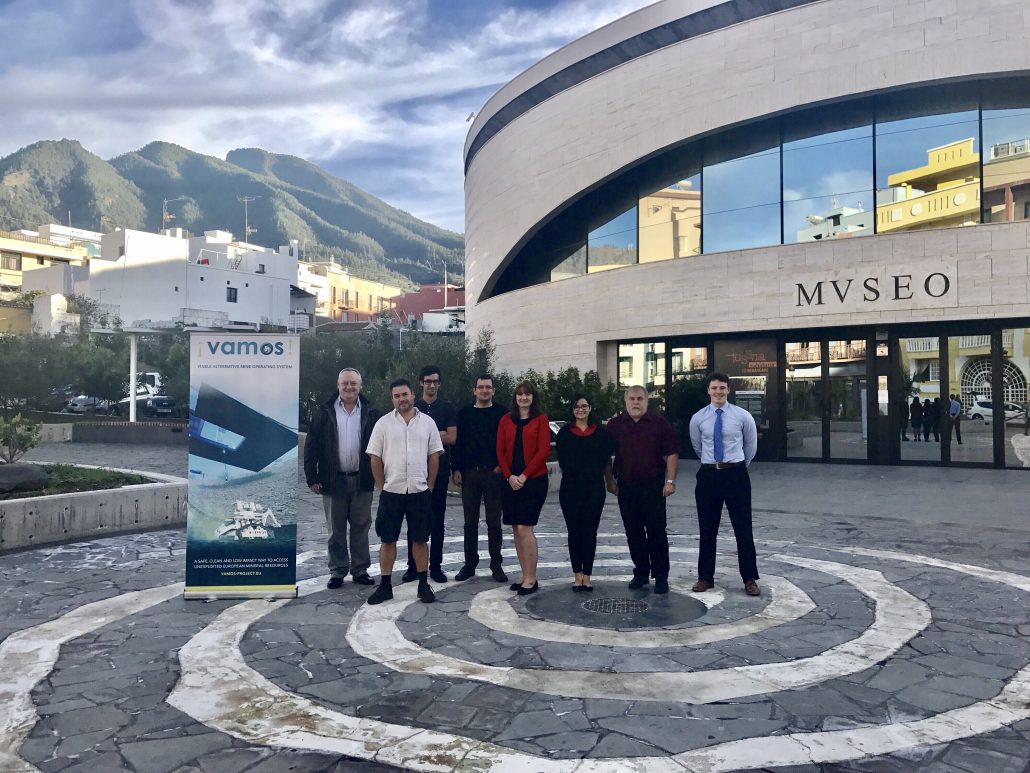 Technical management was present, as was the Project Coordinator together with multiple partners with roles within the Work Package. Participants included senior representatives from specialist geological and industrial mining institutions such as GeoZS (Slovenia), Montanuniversität Leoben (Austria), Soil Machine Dynamics (England), and more.

In reference to the objective of the kick-off meeting, on Wednesday, each pre-identified deliverable was presented by the assigned leader: debate ensued, during which inconsistencies were identified, and understanding was conferred among the group.

The workshop concluded on Thursday morning with a round-up of solutions identified during the first sitting, a brainstorming exercise, follow-up business from the meeting, and a succinct summary action plan.

LPRC will now continue to coordinate this work package, presenting progress at the next ¡VAMOS! meeting in March.

Last week, La Palma Research Centre colleagues Tamás Miklovicz and Cameron Sword participated in a series of workshops and talks organised by the European Commission as part of the European Raw Materials Week in Brussels. The event gathered important players in the raw materials community from Europe and beyond, and focused on broad-ranging discussions between researchers, industrial partners, and policy makers.

On Monday afternoon, the kick-off meeting was held for our new project FORAM: Towards a World Forum on Raw Materials. During the kick-off meeting, the coordinator first introduced the project and consortium members, and then the floor was given to Work Package leaders to describe and explain the work in detail.

On Tuesday morning, Cameron and Tamas participated at the SLO (Social Licence to Operate) Conference, organised by Montanuniversität Leoben. The title of the conference was ‘Re-Connecting Raw Materials with Society.’ Speakers discussed a number of best practices and initiatives which significantly improve the connection between mining companies with local communities.

Opening of the  SLO Conference by Peter Moser, Montanuniversitat Leoben

During the FORAM Public Launch on Tuesday evening, Mathias Schluep (WRFA) gave a concise overview of the project, which was then followed by a panel discussion. Amid an active discussion with the audience, panel members Ruediger Kuehr (UNU), Marcin Sadowski (EASME), Luca Demicheli (EGS), Vitor Correia (EFG), and Mathias Schluep (WRFA) debated obstacles, trends, opportunities, challenges, and initiatives within the world of raw materials.

The panel discussion during the public launch of FORAM

On Wednesday morning, EFG and Fraunhofer IAO led a session on ‘INTRAW: Future Scenarios on International Raw Materials Provision’ at the Royal Belgian Institute of Natural Sciences. The workshop began with the project coordinator Vitor Correia giving a short presentation about the INTRAW project, followed by an introduction to the scenario technique by Flavius Sturm. Following this, the participants were divided into three groups whose objective was to discuss three end-member scenarios devised by the INTRAW team. Each group then engaged in a one-hour discussion on the credibility & accuracy of their scenario, its consequences for raw materials, and the specific actions that need to be taken for the EU to be well positioned in their specific scenario.

During the early afternoon, speakers presented the Raw Materials topics of Horizon 2020 Work Programme 2017, the ERA-MIN 2, and EIT Raw Materials calls. In the evening, various participants were presenting project ideas. 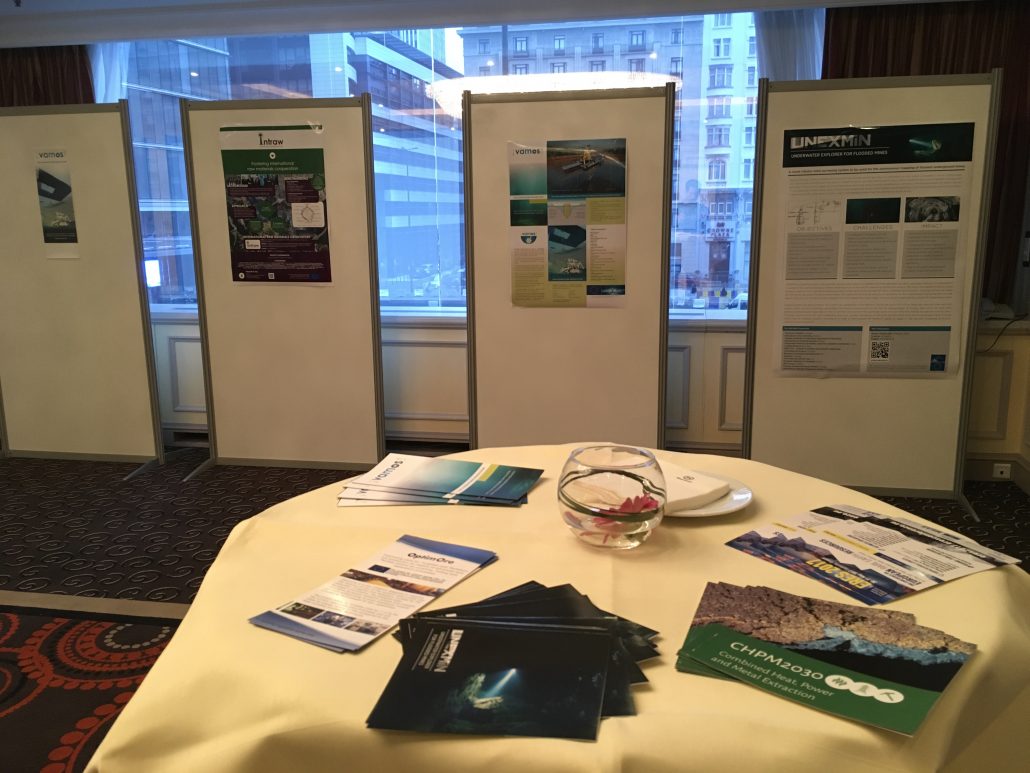 UNEXMIN, VAMOS, and INTRAW project material was in displayed at events across Brussels during Raw Materials Week.

The 4th annual High Level Conference of the European Innovation Partnership (EIP) on Raw Materials took place on Thursday. The programme was divided into a high-level panel on Raw Materials Beyond 2020, and three distinct sessions. The first session regarded ‘Raw Materials Needs in a Future Circular, Low-carbon Economy’ – Prof. Julian M. Allwood gave an inspiring presentation on the low-carbon economy. The second session focused on ‘Copernicus for Raw Materials’, which is part of the European Earth Observation Programme. The day ended with a session on ‘Framework Conditions for Sustainable Mining.’

The Hungarian capital hosted  the “Budapest Water Summit 2016 (BWS 2016)”  between the 28th – 30th of November 2016. This was an important event that resulted from cooperation efforts made by the Hungarian Government and the World Water Council.

The University of Miskolc exhibited several projects in which LPRC is involved, namely Kindra, CHPM2030 and UNEXMIN. The main goal of this space was to display internationally recognised water management technologies. 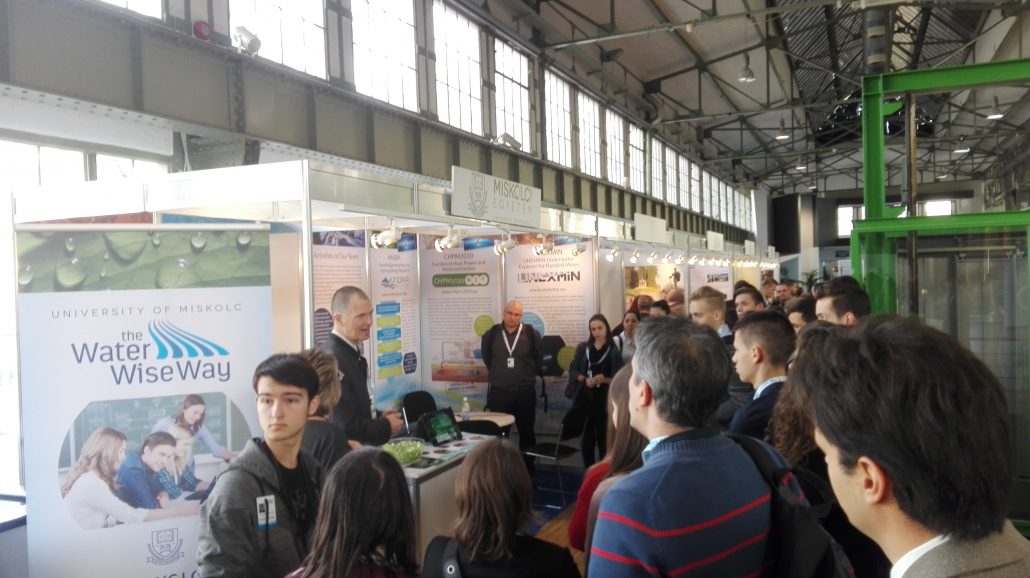 Kindra, CHPM2030 and UNEXMIN projects’ booths in the University of Miskolc’s area.

It is extraordinary, when the projects in which you are involved get to be recognised by no other than the President of the Republic of Hungary (see photo below)! Also, it is important that the technologies, actions and decisions discovered and developed in these European projects get to all the necessary stakeholders, represented also by people in higher positions. 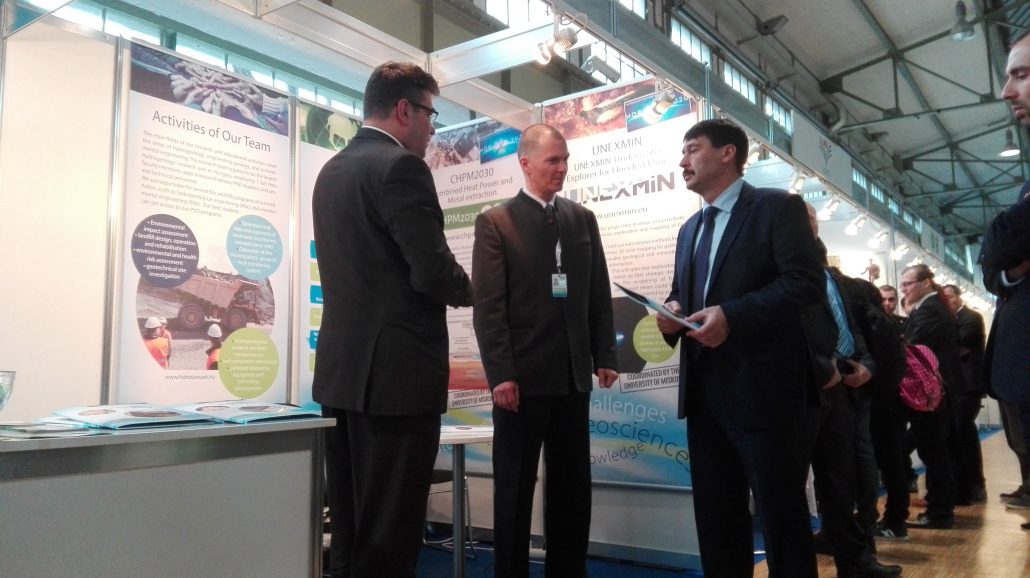